I still can’t believe this is real.

But apparently this is an actual promotional video created by Microsoft’s research team to promote its Songsmith tool – a piece of software that creates accompaniment while you sing along. It’s so bad it’s good and I can’t get the terrible jingle out of my head.

According to the This Week in Tech (TWiT) podcast, Microsoft’s Research labs developed the Songsmith program, then created their own video to promote it. You can download the software for free trial. And many people have. Here are a couple of videos they’ve created by running actual vocals from big name artists through Songsmith. The first, for Oasis’ Wonderwall, isn’t bad. The second, for The Police’s Roxanne, is terrible.

Next week will be my last at Veritas. On February 2, I’m embarking on a new adventure as senior director of social media and digital communications at Rogers Communications. I’ll be building a new team that will develop a social media strategy for the cable, wireless and media company. It’s far too early to get into specifics, but suffice to say that I’m very excited about the challenge ahead.

At the same time, I can’t help but feeling sad about leaving Veritas. This is a tremendous organization with a terrific group of public relations and social media experts. And com.motion (the social media division I helped build and launch 14 months ago) is really starting to take off, as witnessed by our recent expansion into the United States. There are a ton of cool social media campaigns in com.motion’s pipeline and I look forward to seeing them break over the next few months.

So a fond farewell to my friends at Veritas/com.motion and an enthusiastic hello to my new colleagues at Rogers.

Who would have thought that on the day of Barack Obama’s inauguration, the most eloquent words would come from the Bush camp?

In an open letter published yesterday in the Wall Street Journal, Jenna and Barbara Bush offered their advice to Obama’s children Sasha and Malia. In addition to offering tips like having fun by sliding down the banister in the White House solarium and making sure to go to a Yankees game when dad throws out the first pitch, the twins offered some sage advice on how to handle the personal toll of having a father in the world’s biggest spotlight.

Our dad, like yours, is a man of great integrity and love; a man who always put us first. We still see him now as we did when we were seven: as our loving daddy. Our Dad, who read to us nightly, taught us how to score tedious baseball games. He is our father, not the sketch in a paper or part of a skit on TV. Many people will think they know him, but they have no idea how he felt the day you were born, the pride he felt on your first day of school, or how much you both love being his daughters. So here is our most important piece of advice: remember who your dad really is.

Their letter actually made me a little teary as I read it during this morning’s subway commute. I like that the letter is generous and gracious and shows that the Bush daughters have no malice towards Obama. But it’s also a personal reminder that no matter the pressures, expectations and excitement of work, my most important job in the world is to be daddy to my two beautiful little boys. 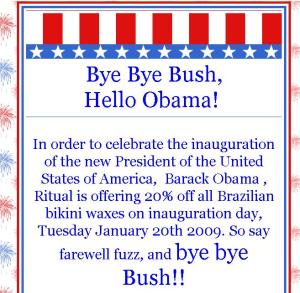 Here’s a clever promotion from Toronto salon and spa Ritual.

The “Bye Bye Bush” promotion offers 20% off Brazilian waxes tomorrow only. It’s a way Canadians can get in on the fun and bid riddance to unwanted bushes (Bushes?) of all types.

The Huffington Post reported Friday on a similar promotion in NYC. Townhouse Spa and Beauty Bar in Manhattan is offering 40 per cent off bikini or Brazilian waxes. “This may be the first good thing that Bush has done for women in 8 years,” The Huffington Post writes.

Big news this week from com.motion. As many of you know, I joined Veritas Communications in 2007 to build and launch a social media division. Year one has been a great success with a portfolio of cool projects for an impressive roster of clients including Staples, NutriSystem, Trojan Condoms, Genworth Financial, Hungry-Man and Boomerang Tracking. I couldn’t be more proud of my team.

This week, we took com.motion to the next level with the launch of com.motion south of the border. Darren Kelly, a social media veteran from Collective Intellect, joins us to run the US division. Welcome to the team Darren. To see Darren’s take on cross-border social media in a global world, read his blog post on com.motionblog.ca 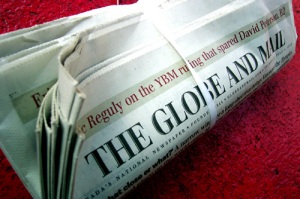 My heart goes out to my former colleagues at the Globe and Mail today. The newspaper announced that it needs to cut its workforce by about 10 per cent, cutting 80 to 90 jobs from its 800-person staff. Roughly half will come from the editorial department.

The immediate impact on employees may not be quite as drastic as it sounds. The unionized Globe must offer buyout packages before it lays anyone off and there will be a plenty of journalists who will jump at the chance to retire early with incentive.

But the layoffs underscore the precarious state of the newspaper industry. The Globe says advertising revenue will drop by $40-million this year. The immediate challenge is the state of the economy. But the more important questions are A) whether this revenue will come back when the economy rebounds and B) whether millennials (those born between 1980 and 1995) will ever even want to read a newspaper.

Until recently, I believed that newspapers (the dead-tree variety) would live on for a long time. I’m no longer so sure. We’ll always need journalists, but we may not always want newspapers. An article in the latest issue of The Atlantic argues that newsprint could become extinct much more quickly than expected, asking: “what if The New York Times goes out of business — like, this May?” The article quotes a December report from Fitch Ratings Service, which monitors the health of media companies:

“Fitch believes more newspapers and news­paper groups will default, be shut down and be liquidated in 2009 and several cities could go without a daily print newspaper by 2010.”

The newspaper industry today is about where the music industry was 10 years ago. And we know how that worked out. Here’s the problem: Newspapers think they’ve adapted because they’ve put their content online and introduced some basic social media tools. But putting the same old content on a new medium isn’t enough. Plenty more needs to be done. 2009 is the year newspapers need to get social or die.

The rather clumsy Wikipedia entry for social media doesn’t provide a date for the birth of the idea, but 1999 is as good a year as any.

That’s the year that Chris Locke, Doc Searls, David Weinberger and Rick Levine published 95 theses that they called the cluetrain manifesto, an outline of how they felt businesses needed to change in a wired world. Ten years later, these theses remain simple, elegant, profound and extremely relevant. When I’m teaching marketers about the philosophy behind social media, I often point to the manifesto and witness my clients as they experience their own little social media epiphany, the way so many others did 10 years ago, around the same time as Seinfeld aired its season finale.

The world has changed immensely over the past decade, especially the online world. But cluetrain remains relevant. In the leadup to the 10 year anniversary of cluetrain this April, I’m going to devote a few posts to the manifesto and how it applies in today’s world.

I’ll leave you with the paragraph that sums up the cluetrain philosophy:

“A powerful global conversation has begun. Through the Internet, people are discovering and inventing new ways to share relevant knowledge with blinding speed. As a direct result, markets are getting smarter—and getting smarter faster than most companies.”

I’ve been blogging for two and a half years. First here. Then here. But mostly here.

A few weeks back I set up this new blog with the vanity URL, imported some of the posts from com.motion blog and then ignored it. That’s about to change. This is going to become my primary blog and posts are going to become more frequent.

Welcome to new readers and welcome back to those who have followed me since I started my dispatches from Cannes in 2006. 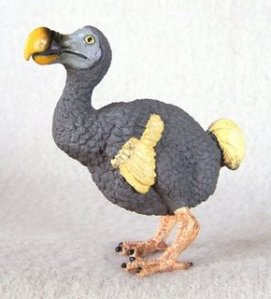 Twitter has replaced Techmeme as my favourite source for knowing what’s hot at this very moment. That’s because people tend to talk on the microblogging tool before they take actions that require more time or commitment such as blogging or starting a Facebook group.

When I checked Twitscoop this afternoon to see what was hot on Twitter today, I noticed that the most discussed term was “embargo” – something that caught my eye as an erstwhile journalist and current PR guy. The news that everyone was buzzing about is that TechCrunch, arguably the most influencial online publication has announced that it will no longer honour embargoes. In a post titled “Death to the Embargo” TechCrunch founder Michael Arrington writes:

One annoying thing for us is when an embargo is broken. That means that a news site goes early with the news despite the fact that they’ve promised not to. The benefits are clear – sites like Google News and TechMeme prioritize them first as having broken the story. Traffic and links flow in to whoever breaks an embargo first.

That means it’s a race to the bottom by new sites, who are increasingly stressed themselves with a competitive marketplace and decreasing advertising sales.

A year ago embargo breaks were rare, once-a-month things. Today, nearly every embargo is broken, sometimes by a few minutes, sometimes by half a day or more. We can’t continue to operate under these rules.

Arrington says TechCrunch will continue to agree to embargoes, but will then break them. The problem, he writes, is that there are no real consequences for publications that break embargoes.

A year ago, when com.motion released our First Annual com.motion-Pollara Social Media Barometer, I decided to experiment with embargoes. I offered the Globe and Mail an exclusive embargo on a few questions and offered a dozen bloggers one exclusive question each. Several agreed to play, but some said embargoes and exclusives don’t make sense in a blogging world.

This year, I tried a different experiment, sending out a message on Twitter that I would offer the full embargoed results to anyone who tweeted me back. Only a couple bloggers were interested. (Many more posted about our results after we formally released them).

Offering embargoes – especially on an exclusive basis – increases the chance of coverage. There are stories I wrote at the Globe because they were exclusive embargoes that I wouldn’t have written if everyone had them at the same time. But embargoes have no value when the news is sent to everybody if even one reporter breaks the embargo. Embargoes have become more common and mean far less. We need to get back to a place where they’re less frequent, more exclusive and respected by both sides. And publications that break ’em need to be punished for the good of those that don’t.

Nice analogy by CC Chapman in the most recent Managing the Gray podcast.

He says too many marketers treat social media like fishing without a hook. They throw a bunch of bait in the water and are thrilled to attract swarms of fish.

Then they go home hungry.